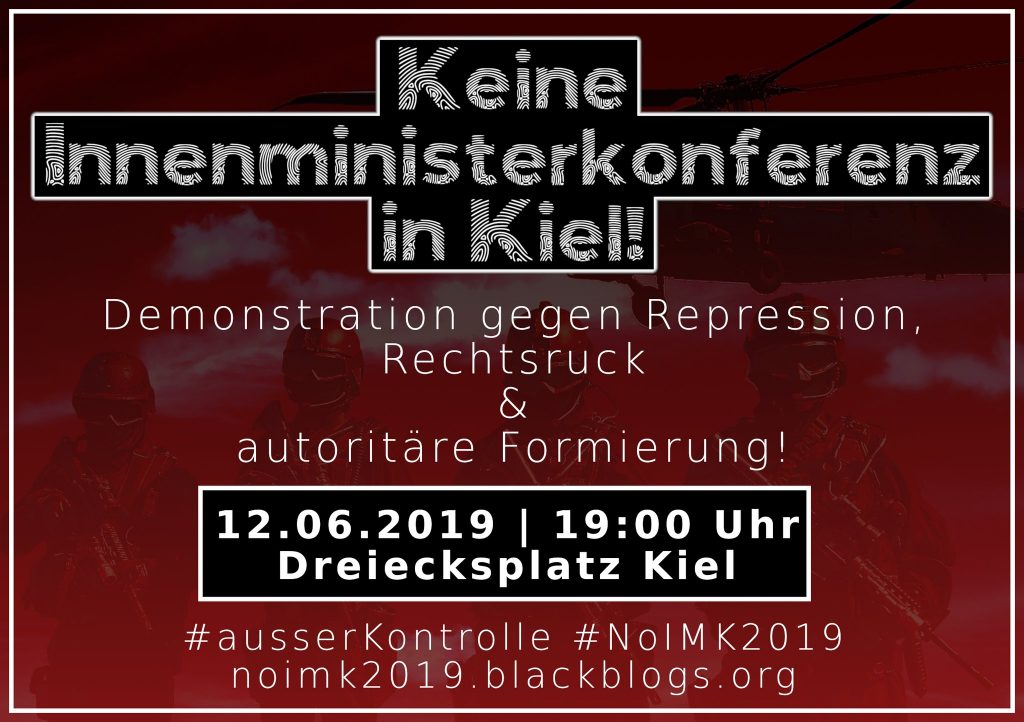 From June 12th-14th, 2019 the 210th Conference of the Ministers of the Interior (IMC) will take place in Kiel. Since its inception in 1954, the meeting of the 16 interior ministers and their staff has been one of the most important bodies for coordinating the domestic and security policy of the federal states and the federal government of Germany. The conference takes place twice a year.

The tasks and topics of the working groups leave no doubt which political orientation shapes the meeting. The rulers negotiate topics like state law and migration as routinely as “counter terrorism”, “security” and police matters. Also constitutional protection tasks are coordinated at the IMC.
Accordingly, the agenda of the last IMC 2018 in Magdeburg includes: the racist “master plan migration” aiming the establishment of so-called “anchor centers”, reports on the situation of Frontex, a seemingly omnipresent focus on the defense against “terror”, the creation of a criminal offense for the use of pyrotechnics and not least the further work on a unified pattern for police law.

Thus, the IMC is a fundamental component of the daily repressive-authoritarian political business of the German Federal Republic which cannot and must not left unchallenged. In 2019, the Conference of Interior Ministers still serves exclusively the aggravation of an already precarious social situation. It stands for racism, capitalism and a police state – and we strongly reject this conference.

We call for action on the streets against this conference of misery management and aggravation! In solidarity with all comrades affected by repression everywhere, with all political prisoners and all those affected by the inhumane power of the German and all other states worldwide!